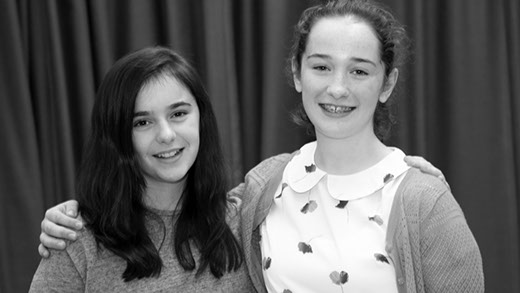 Jemima’s early passion for singing and dancing came together aged eight when she appeared in her first of many Rare Productions at The Elgiva. Her favourites were Les Miserables and Annie when she played an orphan and relished being part of the main cast. Jemima’s next significant role was at Chesham Prep School where she had the lead role in their epic leavers’ musical. Jemima now belongs to Junior Choir, Wind band and Clarinet Choir at Dr Challoners High School, which keeps her musical interests broad. Drama for Life, an after school club, extends her drama skills further whilst progressing though LAMDA examinations. Jemima has enjoyed musical theatre singing lessons with Lee Bright helping her to bring her singing to life. Last month Jemima had her first taste of directing a Year 8 drama competition leading her class to victory.

Anna has been acting and singing since the age of seven through the Blag Youth Theatre Group and LAMDA programme. She has performed in a variety of theatre productions at the St Albans Arena, Watford Pumphouse, Rickmansworth Watersmeet Theatre and the Chesham Elgiva Theatre, including with the St Albans Operatic Society in their production of Annie the Musical. Anna also participates in the annual Watford Festival for singing and acting as well as in various festivals around Hertfordshire. 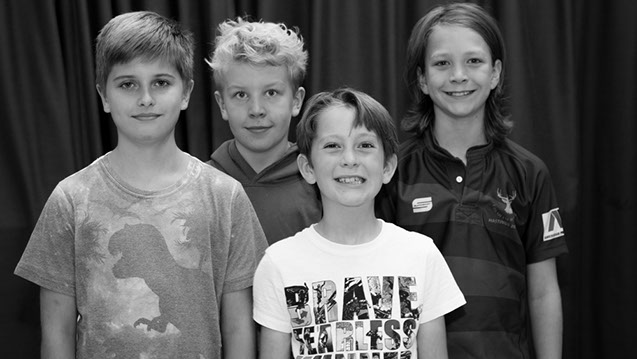 Caspar first got into drama at the age of 7 when youth theatre mentor and very good friend Di Burnett started involving him in clubs, workshops, and then initial grade and Grade 2 Trinity and LAMDA exams, getting distinctions in all of them. He has been in several school productions at The Beacon including Oliver! (Chorus) and Scar in The Lion King. He also got to the final of The Beacon Bard and received the school prize for Outstanding Contribution to Drama. He is currently working on The Secret Garden at Chesham Grammar School playing the part of the Doctor. He auditioned for the film Goodbye Christopher Robin, directed by Simon Curtis, and the stage play of Running Wild by Michael Morpurgo . He also featured in Dr Dolittle at the Wycombe Swan. He has a passion for drama and performing in general (he wants to be the next Tom Hanks!) and is honoured to be working with Guy Siner.

Cooper is a Year 6 pupil at a local school. His previous acting experience includes playing one of the King of Siam’s children, child 11 to be exact, in a production of The King and I. Most recently he played Zacharias Wrench in a local production of Goodnight Mr Tom. This was a very exciting role, where he was required to play a very confident and enthusiastic evacuee who had the opportunity to sing and tap his way on his own onto the stage.

A couple of years ago, Cooper also played the part of Peter Cratchit in a local company’s performance of A Christmas Carol -a bit of a warm-up for the role he portrays now! Cooper is a keen rugby player, who also dances and plays the saxophone.

Sam is 12 years old and attends Chiltern Hills Academy. He has previously played William Beech in Goodnight Mister Tom, Kurt in The Sound of Music, Ensemble Little Shop of Horrors at Chiltern Hills Academy, Scarecrow in The Wizard of Oz. He also appeared in The Wizard of Oz professional panto as a Munchkin, Wind in the Willows as Portley Otter, Mouse and Robert Rabbit, Oliver in Oliver!, a Snowchild and young Billy in Carousel. He has just achieved Grade 2 Lamda and has performed in various concerts including at the Royal Albert Hall and the O2 arena.

Thomas is a Year 4 pupil at a local school. His previous acting experience includes playing Albert Smith in a local production of Goodnight Mr Tom. He portrayed an evacuee, complete with suitcase and label, who was sent away to the village of Little Weirwold, to wait for the Second World War to finish. His first experience of treading the boards as a budding actor, was in a local company’s production of A Christmas Carol, where he played the part of Tiny Tim - just like he will be today... well, they say practice makes perfect! Thomas is a busy boy, who also enjoys playing rugby, has been dancing since he was 3 and even has a flute lesson every week.